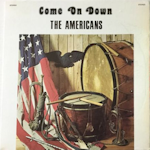 hi-res
1974 Come On Down (Prestige Records/): Come On Down; Because He Lives; Over The Moon; What A Morning; Release Me; Good Ole Gospel Singing; Precious Memories; Listen To The Bells; Down By The Riverside (instrumental); I'll See You In The Rapture (Booth, Pearson, Kitchens, Gresham, McDaniel, Watwood, Ashton).
All articles are the property of SGHistory.com and should not be copied, stored or reproduced by any means without the express written permission of the editors of SGHistory.com.
Wikipedia contributors, this particularly includes you. Please do not copy our work and present it as your own.