The Brown's Ferry Four started in Cincinnati for radio station WLW as a last minute, spur of the moment replacement group for a half hour radio program. The group consisted of brothers Alton Delmore and Rabon Delmore, and friends Merle Travis and Louis Marshall Jones, better know as "Grandpa" Jones. The group rarely made personal concert appearances, relying solely on radio performances and records for their popularity. The group disbanded in 1952 with Jones and Travis going on to successful careers in country music. 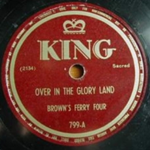 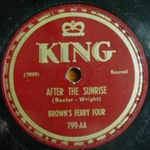