The Frank Stamps Quartet introduced innovative practices for their time. When Dwight Brock (brother to Lena "Mom" Speer) joined the group to play the the piano, he was one of the first accompanists to introduce instrumental turnarounds between the verses. The addition of Brock also established the now revered “four guys and a piano” configuration for male quartet singing.

Frank Stamps relocated his group to Chattanooga, TN in late 1926. In 1927, the group signed a recording contract with Victor records. Their recording of "Give The World A Smile" has been said by some to be Southern Gospel's first "hit."

Frank disbanded his quartet for several years after the start of the Great Depression, but by the late 1930s he had reorganized. They performed on radio station KMA in Shenandoah, Iowa.

By the late 1930s, there were dozens of groups in addition to the Frank Stamps Quartet using "Stamps," "Baxter" or a combination of the two names in their advertising. This showed their affiliation with the Stamps-Baxter Music publishing company. These groups were essentially traveling salesmen, selling songbooks for the company.

The division did not bring about the end of the various quartets, however. Most of the members of the Old Original Stamps Quartet left Stamps-Baxter to join Frank in his new company where they, along with Frank, sang regularly on the radio in Dallas and made occasional public appearances. They were sometimes called the “Old Gentlemen” or more often, simply the Stamps Quartet.

Frank's All Star Quartet was promoted as the top group in the Stamps family, so any time a member would quit, the next best man was immediately moved into his place. The All Stars featured a number of servicemen returning from World War II including future Cathedral Quartet member Glen Payne. They sang on the radio in the mornings and went out for singing engagements just about every night.

Frank Stamps decided to narrow his attention to publishing songbooks around 1950. The quartet composed of the “Old Gentlemen” was disbanded and the Stamps All Star Quartet became the Stamps Quartet. Long time Stamps-Baxter and Stamps employee Harley Lester became the manager of the group. They continued with their radio and concert work and made a number of recordings. When Lester left the quartet around 1955, Howard Welborn took on the role of manager.

In 1965, J D Sumner left the Blackwood Brothers and began traveling with the Stamps. Once Sumner joined the group, they were billed as JD Sumner And The Stamps Quartet. 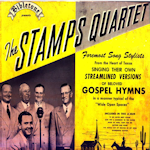 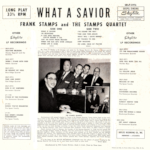 hi-res
1961 What A Savior (Skylite Records/SRL P5976): What A Savior; I'm Rejoicing; If You Miss Heaven You've Missed It All; Just An Echo From Heaven; When The Sun Sets Over Jordan; When Life Is Over; I've Found The Way; Time And Time Again; What Will I Leave Behind; My Thanks To Him; Keep Walking; O Lord, Hear My Prayer. (Loy Hooker, Arthur Watson, Billy Porter, Jimmy Grisham, Cecil Pollock, Frank Stamps, Mary "Sally" (Mrs. Frank) Stamps. This line-up was known as the "Stamps Office Quartet." They did most of their singing at singing conventions near the Dallas area and all worked in the Stamps office. A later release by the Stamps Quartet after the name was sold to JD Sumner featured a similar cover and shared the same catalog number, but with different singers and mostly different songs. Click HERE to compare the other LP.) 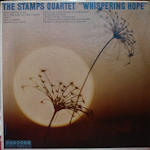 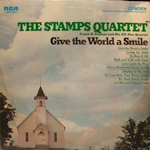 hi-res
1968 Give The World A Smile (RCA Camden/CAS-2193): Give The World A Smile; Living For Jesus; He Bore It All; Walk And Talk With Jesus; Love Leads The Way; He's A Wonderful Savior To Me; Singing In My Soul; Do Your Best Then Wear A Smile; We Shall Reach Home; Let Me Live Close To Thee (A compilation of recordings made between 1925 and 1930. Palmer Wheeler, Roy Wheeler, Odis L. Echols, Frank Stamps, Dwight Brock).