James Blackwood was born in Mississippi in 1919. In 1934, at the age of 15, he joined with two older brothers and a nephew to form the Blackwood Brothers quartet, one of Southern Gospel Music's most influential groups. He sang in the quartet from it’s beginning in 1934 until he joined the Masters V in 1981.

He was an original member of the Masters V Quartet and was the leader of the James Blackwood Quartet. He and his wife Miriam had two sons, Jimmy Blackwood and Billy Blackwood.

James Blackwood passed away in 2002. 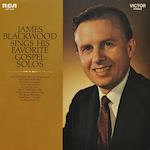 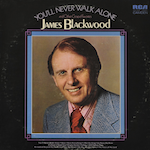 hi-res
1969 James Blackwood Sings His Favorite Gospel Songs (RCA Victor/LSP-4165): Now I Have Everything; I Met The King; As Flows The River; It's Been A Good Trip; Empty Hands; I'd Be There; You'll Never Walk Alone; Follow, I Will Follow Thee; Unworthy; He Looked Beyond My Faults; On My Journey Home; The Things That Matter. ( Re-issued in 1973 as You'll Never Walk Alone on RCA Camden ACL1-0191, minus 3 songs named I'd Be There, Unworthy, and The Things That Matter. Note: There was 1 song added to this album that was not on LSP-4165 called The Voice Of The Lord with the Blackwood Brothers). 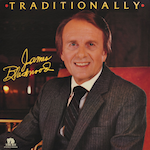 hi res
1983 Traditionally (Voice Box Records/VB-4006): The Sound Of Music; He Touched Me; Easter Song; Take Away The Stone; God Is Alive; Let Jesus Happen To You; How Great Thou Art; Yeshua La Mesiah; Vessel Of Honor.

hi res
1985 The Masters V Present 50 Golden Years With The Fabulous James Blackwood (Skylite Records/SLP-6337): Don't Be Knocking; Six Feet Of Earth; I Can Hear The Harbor Bells; Heaven's Harmony; Roy's Prayer; I've Never Been Sorry; When We Sing Around The Throne Eternal; His Hand In Mine; Majesty; Sheltered In The Arms Of God; One Day; Oh What A Moment; Heaven's Sounding Sweeter All The Time. 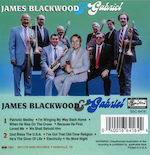 hi res
1991 James Blackwood and Gabriel (Skylite Records/SSC-6416): Patriotic Medley; I'm Winging My Way Back Home; When He Was On The Cross; Because He First Loved Me; We Shall Behold Him; God Bless The USA; I've Got That Old Time Religion; He's The Giver Of My Life; Electricity; No More Night.

2000 The Great Gospel Hit Parade: From Memphis To Nashville To Texas (with the Jordanaires) (Art Greenhaw Records AG2001).