Jobe Simmons (AKA "Jay" and "JW") was born in 1934 in Surry County, in the mountains of North Carolina. His parents were Jobe and Dora Moser Simmons. Jay began his professional gospel quartet bass singing career at age 19 with the Simmons Brothers in Harrisonburg, Virginia. In 1959, Jay moved to Charlotte, NC and joined the Harvesters Quartet with Bill Hefner, Buddy Parker, Don Norman, and Jack Clark. They appeared regularly on WBTV, Charlotte’s CBS affiliate.

In October, 1962, Jay moved on to the Prophets Quartet with Ed Hill, Jay Berry, Big Lew Garrison and Joe Moscheo in Knoxville, Tennessee. After Berry moved on and Jack Toney filled the lead role briefly, Roy McNeal joined the Prophets. Collectively, they had a very high range with Simmons balancing out the sound with his solid, low bass singing. During Jay's tenure with the Prophets, they were regulars on the Gospel Singing Caravan syndicated television program, along with the LeFevres, the Johnson Sisters, and the Blue Ridge Quartet.

After Jay left the Plainsmen, he joined the Sego Brothers for a short time.

Jay went on to a diligent solo ministry of singing and testimony before closing out his career.

Throughout his singing career, he was known not only for his ability provide the foundation for the quartet’s sound and to hit the low notes, but Jay also excelled at solos. He was often featured on songs which rarely featured a quartet’s bass singer.

Gospel music legend, the late J.G. Whitfield referred to Jay as “a bass singer’s bass singer” and said Jay was one of the “best ever.” 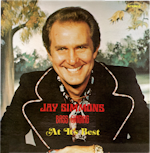 hi-res
1977 Bass Singing At Its Best (Brian Brothers Studio/ARP 9657 and 9658): Practice What You Preach; Somebody Bigger Than You And I; Time Has Made A Change In Me; They Tore The Old Country Church Down; How Long Has It Been; Please Search The Book Again; I Am A Pilgrim; Farther Along; The Uncloudy Day; Precious Memories ( Jay Simmons; Bryan Brothers Quartet; musicians: Donnie Southwell, Roland Obert, Terry Tate, Gary Bryan, Billy Bryan). 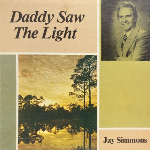 hi-res
198? Quartet’n (Tri-State Recording Co./TSRC 9832): Standing By The River, How Beautiful Heaven Must Be, Cowboy Camp Meeting, You Sho’ Do Need Him Now, Lead Me To The Rock, Wonderful Time Up There, I’m Free Again, God Made A Way, Wait Upon The Lord, I’ve Got A New Born Feeling, Lily Of The Valley, A Beautiful Life (a compilation of songs from various quartets that included Jay Simmons).
All articles are the property of SGHistory.com and should not be copied, stored or reproduced by any means without the express written permission of the editors of SGHistory.com.
Wikipedia contributors, this particularly includes you. Please do not copy our work and present it as your own.