Miracle Men (1951-1953) Lee Roy Abernathy organized the Miracle Men Quartet in late 1951 in Atlanta, Georgia. Lee Roy brought in his good friend of many years, Carroll “Shorty” Bradford, to sing lead. J. L. Marona, who was a long-time friend of both Bradford and Abernathy, came on to sing tenor. Marona and Bradford had sung together in the St. Louis Stamps-Baxter Quartet. Idus Spivey was the quartet’s baritone. At bass was Aycel Soward, a former cohort of Abernathy and Bradford from the Homeland Harmony Quartet. Soward was also a former member of the Statesmen Quartet and had recently left the All American Quartet. Lee Roy Abernathy was the manager and pianist.

By early 1952, Earl Terry, who had sung with the All American Quartet, the Statesmen, and more recently, the Lefevres had come to sing tenor. Marona moved over to baritone for a short time before leaving the quartet. The quartet was known for the quality of its singers and for mastering difficult musical arrangements. The Miracle Men Quartet is thought to have disbanded in early 1953. 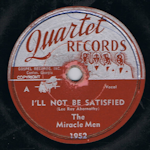 hi-res
1952 (Quartet Records): I'll Not Be Satisfied; Termites In The Temple.

1955 (Quartet Records): Miracles Will Happen; Out Of This World.

1957 (Quartet Records): Cultivating Flowers; It's Worth It All.

(The Miracle Men disbanded in 1953, but Lee Roy Abernathy continued to release 78 RPM recordings of the Miracle Men on his Quartet Records label for several years.)
All articles are the property of SGHistory.com and should not be copied, stored or reproduced by any means without the express written permission of the editors of SGHistory.com.
Wikipedia contributors, this particularly includes you. Please do not copy our work and present it as your own.