Rosie Rozell became one of the premier tenors in the Southern Gospel Music industry. He was inducted into Southern Gospel Music Association (SMGA) Hall of Fame in 1999. After singing with the Tulsa Trumpeteers from the late 1940s through the mid-1950s, he was hired by the Statesmen Quartet in 1958. He quickly emerged as a unique stylist, thrilling audiences with unforgettable performances on songs like "Hide Thou Me," "Leave It There," and "Oh What A Savior." Over the next decade and a half, he anchored the tenor position and helped keep the quartet at the top of the Southern Gospel Music profession. In January 1970, Rosie left the Statesmen to form a successful family group--Rosie Rozell And The Searchers. Over the next two decades, he remained one of the most popular personalities in the gospel music industry and, despite poor health, continued to perform with amazing quality and consistency. He returned briefly to the Statesmen in the mid-1970s and then sang as one of the founding members of the legendary Masters V in the early 1980s. He also sang with the James Blackwood Quartet and the Foggy River Boys. 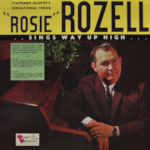 hi-res
1963 Statesmen's Quartet Sensational Tenor "Rosie" Rozell Sings Way Up High (Heartwarming Records/Benson Records/Stereo Version LPS-1732/High Fidelity Version LPHF-1733): When I Come To The End Of The Road; He Cared That Much For Me; Lonely Road Up Calvary's Way; Stand By Me; Sittin' Around The Table Of The Lord; The Last Mile Of The Way; That Lonesome Valley; I Do Not Ask; I'd Rather Have My Jesus; Connect Me With Heaven; A Man Called Jesus; Somebody Loves Me. 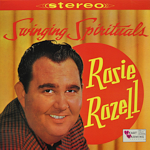 hi-res
1963 Swinging Spirituals (Heartwarming Records/Benson Records/Stereo Version LPS-1746/High Fidelity Version LPHF-1747): Seek Ye First; Who Knows; He'll Understand And Say Well Done; Precious Memories; Don't Take That Love From Me; No One To Welcome Me Home; Every Time I Feel The Spirit; Beyond Understanding; Make Me A Blessing Today; Mercy, Lord; When The Saints Go Marching In; There's A Lot Of Things I'd Like To Say. 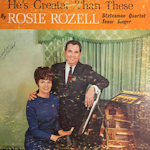 1984 Alive An Well (Top IV Productions): He's Got The Whole World In His Hands; One Day At A Time; He Knows How Much We Can Bear; I Bowed On My Knees And Cried Holy; Where Could I Go But To The Lord; Leaning On The Everlasting Arms; If I Could Help Somebody; Medley: Just A Closer Walk With Thee/We'll Understand It Better/Will The Circle Be Unbroken; I'll Never Turn Back No More; Oh, What A Savior.
All articles are the property of SGHistory.com and should not be copied, stored or reproduced by any means without the express written permission of the editors of SGHistory.com.
Wikipedia contributors, this particularly includes you. Please do not copy our work and present it as your own.