Steve Warren sang tenor with the Masters V for two years during the 1980s. He also sang with JD Sumner And The Stamps Quartet in 1988-1989 and again in 1991-1992. He was with the Statesmen briefly in 1994 and with the Blackwood Brothers briefly during that same year. In December 1994, he began working as Wayne Newton's pianist and was regularly featured as a soloist during Newton's performances. During his tenure with Newton, he appeared (uncredited) as a member of Newton's band in the major motion picture Vegas Vacation starring Chevy Chase.

In 1997, Warren returned to the Blackwood Brothers to sing tenor. He remained with that group until Cecil Blackwood passed away in 2000. After his stint with the Blackwoods, Warren released several recordings billed as Steve Warren "The Voice." He also sang with Ron Blackwood and the Blackwood Singers. In 2009, he became the lead singer for Ed Crawford and the Mystery Men Quartet. He also performed with such groups as the Blackwood Quartet, Men Of Music, and Plainsmen. 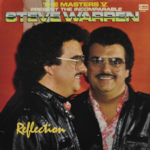 hi res
1984 The Masters V Present The Incomparable Steve Warren Reflection (Skylite Records/SLP 6323): Heaven, Home Of The Soul; A House Of Gold; A Day In The Life; All Good Things (For Aron); Will They Love Him Down In Shreveport; Oh My Lord, What A Time; You Never Show'd Me; Release Me; It Must Have Rained Heaven; Rock Of Ages.